This way! No that way! Wait, over here!!

So my sister in law made me this f*cking (yes it actually deserves the prefix f*cking 'cause that's how awesome it is!) spectacular Christmas present!  It's a directional sign for my yard and I wouldn't mind going to all the places she thought to include.  She knows me so well.  D'awwwww!!!!! 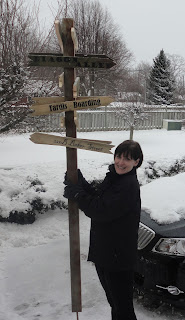 Diagon Alley?  Be careful, there are some sketchy wizards lurking around.
Tardis Boarding?  Where will we end up?
How's about heading over to visit Sherlock Holmes on Baker Street? 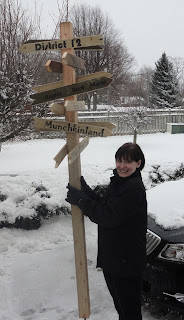 Wanna play some Hunger Games over at District 12?  Don't die!
A trip to Castle Rock, Maine?  Be careful, nothing good ever happens in Castle Rock.
Be careful that a house doesn't fall on you in Munchkinland! 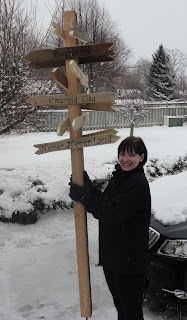 Head on over to Hogwarts?  No worries, I'll lead the way!
How about visiting with the wizard in the Emerald City or taking a flight to Never Never Land? 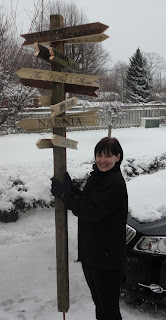 Take off for out of this world adventures to the Starfleet Academy.
Or venture off to Hobbit's Shire to see what they have in store for you.
Or maybe a trip to the magical world of Narnia!!

I'll likely just end up running in circles in my yard because I can't make up my mind!  So many great options.  This is seriously an amazing gift!!!!

Eric thought of incorporating it into the fence we are building this summer, but if I move, and at some point I will, I won't be able to take it with me.  That would make me a sad girl.  So I'll have to give it some thought on placement for the most optimal exposure to the masses.
Posted by Missy Aggravation at 1:19 PM

Email ThisBlogThis!Share to TwitterShare to FacebookShare to Pinterest
Labels: Crafts, Do It Yourself Projects, Family

Come on, don't be shy. Join the party. It's gonna be fun!

I Yam Who I Yam

Missy Aggravation
A girl who gets lost in books, movies and TV...Not the actors or authors themselves, but the characters - the girl I want to be, the girl I could never be - the boy I want, the boy I could never have. Just a girl who believes that we have a music soundtrack playing at all times in the back of our brains, we've just, over the years, learned to tune it out. Kind of like our own heartbeats.