Stop! You're Ruining the Colour Pink!

I've been, overall, a pretty lucky individual throughout my life.  Sure I used to complain that most days it felt like I had an albatross shoved up my ass rather than the elusive horseshoe, but overall?  Pretty damn lucky.

For many years I've been lucky enough to avoid the "Big C" and how it seems to infiltrate itself into every darn family nowadays.  Sure Cancer licked at my doorstep through some extended family long ago, and Eric's mom is a Breast Cancer survivor, but she fought and won that battle before I was in the picture so I didn't experience first hand the effects it had on her as an individual and the family.  But then two and a half years ago (as most of you loyal readers know) Cancer slapped me, my family and most importantly, my father in the face.  Hard.  And it woke me the fuck up-out of my little cocoon.

In the past two and a half years I've been on a sort of quest to try to understand the thoughts that went through my dad's head for the 12 days he was "Dad with Cancer" and not just "Dad" anymore (bubble burst remember?).  During this journey I was introduced to an amazing woman who has given me some insight, helped changed the way I used to think about cancer (and how it would never affect me) and has inspired me to educate myself and learn more.  And then just last week I got some terrible news about another woman in my life who is now heading into her own battle with Breast Cancer.  I've learned just because I stuck my head in the sand and allowed my ignorance to make me complacent doesn't mean it will always stay that way.  And it shouldn't.  Because Cancer will affect many people I cherish and love, even potentially myself, so I should know everything I can.  The good, the bad and the ugly.  Cancer isn't just about coloured ribbons.  It's so, so much more than that.

The other sad news?  The media likes to promote "awareness and hope", but in doing so it hides the scary truths about Cancer and leads us all into having a lovely misconceived idea of this deadly disease. We're brainwashed to believe that buying that mixer or blender in pink or that totally sweet pink pajama set that we're doing our part and helping "fight the fight".  So, while in a strange way they are promoting awareness (Which they are - mammograms are on the rise!  It's a start.) I've learned that it is so far from the actual truth of what fighting the fight really is. 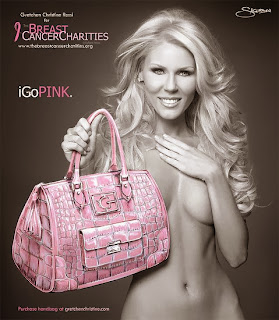 The above is an actual advertisement trying to create awareness and asking for support of Breast Cancer Research.  I'm appalled that some advertising agency actually came up with this campaign but more importantly that someone within the organization named above actually signed off on this ad!  That they thought this was a good representation of what Breast Cancer is just fucking blows.my.mind.  This just tells me that it is totally okay to continue to encourage the public into keeping their heads in the sand.

Well I'm here to tell you (even though I do not know first hand - thankfully) this is NOT a realistic picture of Breast Cancer.  Every day in Canada 14 women die from Breast Cancer.  Having worked in the profession that takes care of these ladies after they pass, I can ASSURE you they do not look like this!  And by the way, buying a pink purse does not make the ugly stuff stay away.  Breast Cancer will eventually make her so weak she couldn't even carry that damn pink purse above, if she wanted to. But, she'll have a pretty bag for her family to bring her clothing to the funeral home in!!  Silver linings people, silver linings.

I also cannot begin to fathom how insulting it is for a woman fighting Metastatic Breast Cancer to look at this ad with this douche bag 'Real Housewife of Orange County' (sorry Gretchen) and her luscious, shiny, flowing blond locks, her perfectly sculpted eye brows and lengthy lashes; just to name a few things wrong with this picture.  I can only assume that one's self image is decimated by the ravaging nature of this disease,  and that seeing this perfectly sculpted specimen only enhances those new found or underlying insecurities.  I'm honestly at a loss as to who this campaign is targeting.  Because if I thought I could look like this woman, I'd almost wish for Breast Cancer (sic).

Please people, wake up!  There is a real world out there and the nasty, dirty, evil  Cancer is part of it. Hollywood and the media aren't helping to educate anyone!  Maybe if they showed the stuff no one wants to face and the government didn't bow down to the pressures of the pharmaceutical companies and their quest to make the country millions, we'd start to get an upper hand on this terrible disease.  But please stop living in a bubble.  Know that Cancer is ugly, it's not pink.  Know that many people fighting cancer more often have a scowl, sneer, wince, or tear on their face than a smile.  And rightfully so.  It's okay to be angry. It's okay to be scared.  It's okay to be sad.  And it's damn sure okay to be pissed right the fuck off!

Posted by Missy Aggravation at 9:32 PM

You wouldn't want to risk missing out on my witty banter would you? Sign up! It's free.

Come on, don't be shy. Join the party. It's gonna be fun!

I Yam Who I Yam

Missy Aggravation
A girl who gets lost in books, movies and TV...Not the actors or authors themselves, but the characters - the girl I want to be, the girl I could never be - the boy I want, the boy I could never have. Just a girl who believes that we have a music soundtrack playing at all times in the back of our brains, we've just, over the years, learned to tune it out. Kind of like our own heartbeats.